The Evidence for Contraceptive options and HIV Outcomes (ECHO) Study

The ECHO study is the first clinical trial looking into contraception options and the risk of HIV acquisition. The need for a clinical trial became apparent because contradictory evidence about the risk of HIV acquisition on different contraception methods were becoming available over the last 30 (?) years! ECHO was the first study to provide high quality evidence as it was structured as a randomised trial which run in 4 countries : South Africa, eSwatini, Zambia and Kenya and recruited HIV negative women from 12 sites. The total number of women recruited was 7.829. Those women were randomised into 3 types of contraception (meaning they were assigned to a contraception method – did not choose it, although they could withdraw from the study if they didn’t like the method assigned): An injectable called DMPA, the cooper IUD, and a Levonorgestrel implant. All these are long acting reversible contraception methods while the cooper IUD is not hormone – based. 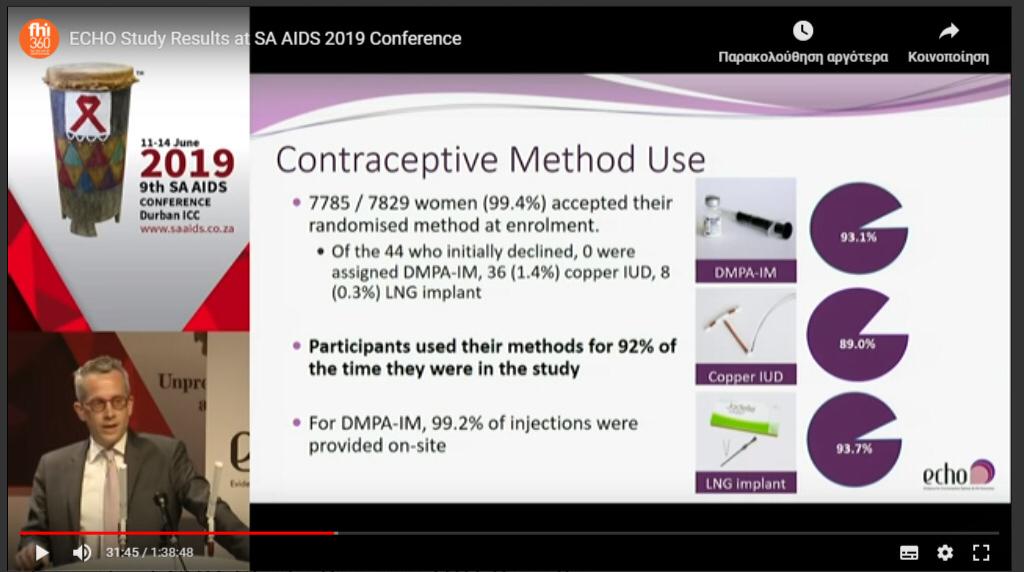 The preliminary results were presented in mid-June 2019 and from the 3 types of contraception examined the HIV acquisition risk is similar. That means: The pregnancy rates were very low – about 1% for each method. Also, 397 women seroconverted during the trial, accumulating an incidence of 4%. Even though tis number is quite high it was not related to any specific contraception method. The numbers were spread almost evenly among all 3 contraception methods. 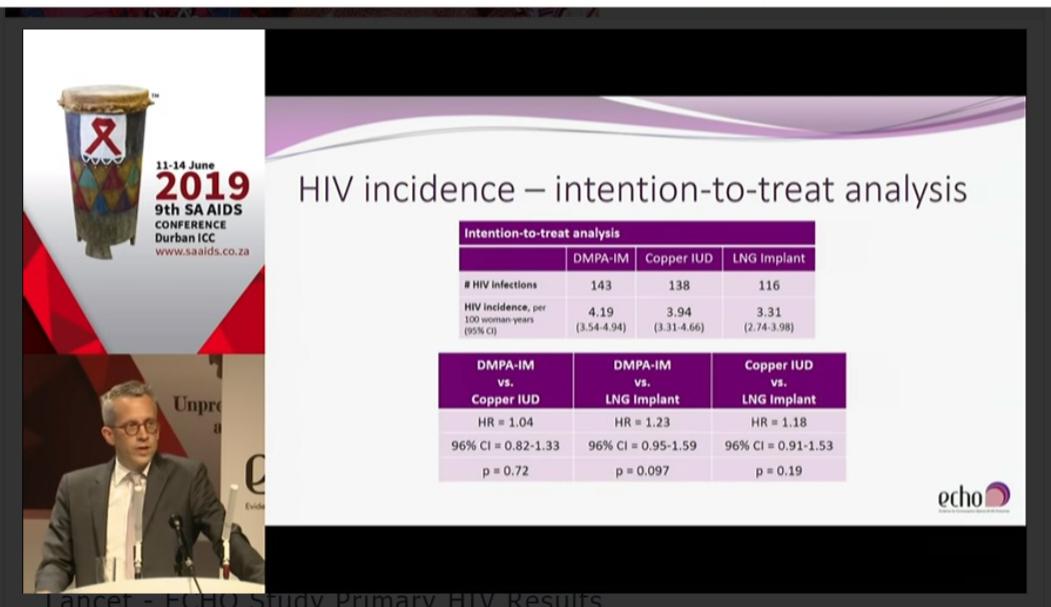 That is a very important fact for women choosing contraception method – mainly because it clarifies their HIV risk is not increased. Nevertheless, as it was highlighted during the presentation of the study: this research is limited as not all available contraception options were examined such as the patch, the pill, the ring or the hormonal IUS.

Are there any secondary findings?

What is even more important in my opinion, and was mentioned both during the AIDS2018 conference in Amsterdam and the 9th SA AIDS Conference in Durban 2019, was that women in real life are not supported enough when choosing a contraception method or for the management of their symptoms (side effects). This can be due to availability of products and /or services but in essence the practice does not provide a friendly environment and doesn’t support informed choices. The women who participated in the ECHO Study, even though they were not able to choose their contraception method (but had every right to decline participation if they did not like it), according to the researchers, were supported in groups or 1 to 1 sessions, received counselling on HIV prevention methods and were given condoms during clinic visits, and from a point on, although much later in the study, were given the option of PrEP as this became the standard of care. Obviously, this is not the standard of care in real life no matter which country you are receiving contraception and family planning/sexual health services in.

Update from IAS 2019: Further analysis of the data confirmed that oral PrEP integration was feasible for the service and had good uptake from the study participants. Even though PrEP only became available in all sites by June 2018, when given the choice 17.2% of the women participating in the trial started taking PrEP. 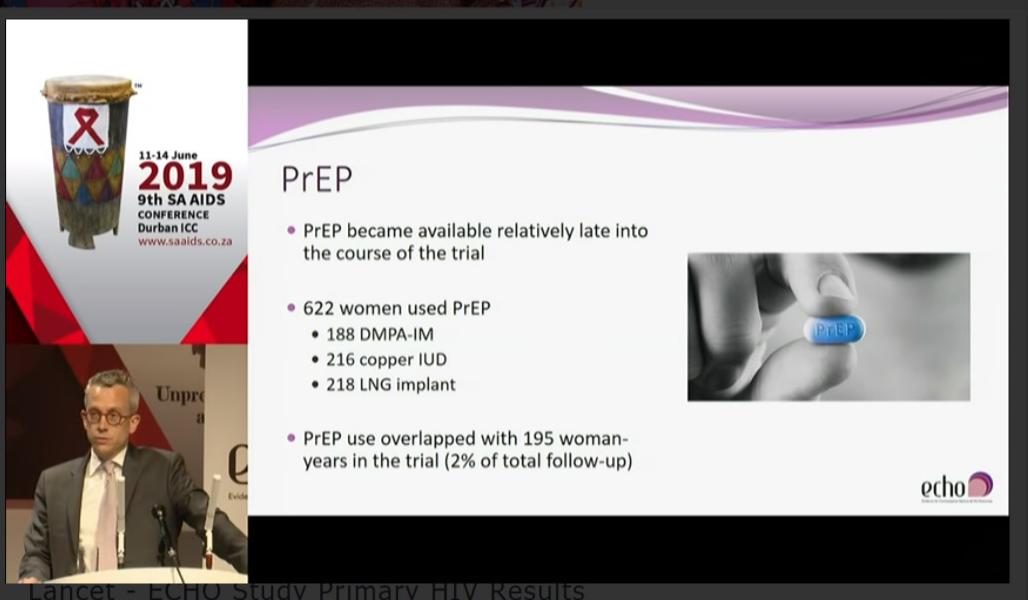 Moreover, the study included women of the reproductive age (16-35 y ears old) with 63% of women participating in the trial being under the age of 25. A lot of women presented with STIs: about 18% of the women participating in the trial presented with Chlamydia infection, 5% were diagnosed with gonorrhoea and 38% with genital Herpes. If we look into the evidence from ECDC about Sexually Transmitted Infections in the EU it appears that women are diagnosed with 52% of the Chlamydia cases, 25% of the gonorrhoea cases, and 14% of the syphilis cases. The ECDC evidence also highlight that gonorrhoea and chlamydia are most common in the ages of 15-25.

Update from IAS 2019: Further analysis of the data from ECHO trial confirms that the STI prevalence is higher in women under the age of 24. Despite STI treatment during follow up visits the prevalence remained high for women in the trial. At the final visit the prevalence of Chlamydia was 15.4% and 4.8% for Gonorrhoea. Another trial, the PopART study (conducted in Zambia, KwaZulu Natal and South Africa), presented at IAS 2019, according to aidsmap reports, found that the groups more likely to be involved in HIV transmission were: Women between the ages of 20-24 and Men between the ages of 25 – 29, highlighting the importance of involving men in the prevention interventions, especially men belonging to the above mentioned age group. 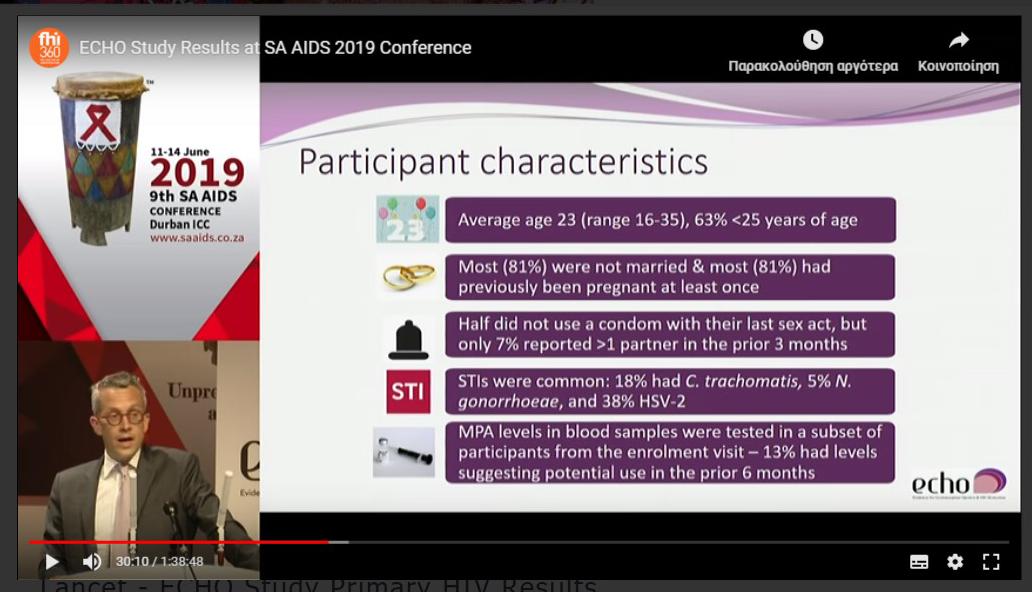 Is this study only about Africa?

In my opinion this is high quality evidence that can be translated into several countries, taking cultural parameters into consideration: Anywhere in the world where women are using contraception. Anywhere in the world where men and/or women like to have sex without condoms. From the ECDC report (with all its limitations with regards to different methods for data selection from all the countries) it becomes very obvious that we too, in Europe, don’t always use condoms.

Is this study about choice?

This study highlighted that choosing contraception method can be a very lonely process for a lot of women. It also highlighted that support for dealing with the symptoms and side effects is limited. But yes, in a way it is about choice: It looked into 3 different contraception methods and proved that the HIV risk is not increased when using them, which provides women with at least 3 more options.

Update from IAS 2019: Lucy Stackpool-Moore, the IAS Director of HIV Programmes and Advocacy, highlighted: “Truly integrated comprehensive care means that a woman should be able to receive effective and quality contraceptive counselling, STI and TB screening and HIV care under one roof”, highlighting the need for integration and upscale in quality and quantity of services offered to women around the globe.

What is the availability of contraceptive methods in Europe?

Finally, it highlighted that not all contraception methods and options are available in all countries. From a recent survey we run in European Countries we concluded that the following contraception options were available as following: